In recent years, we’ve seen a blooming amount of study in the field of healthy aging. Studies in a variety of model organisms and humans have found that dietary restriction(DR) is a highly conservative intervention strategy to delay aging and promote longevity. Perhaps people from every culture would admit that there’s a saying in their own language with a meaning similar to “The less you eat, the longer you live.”.

Previously, a team from the Huazhong University of Science and Technology has found that when C.elegans sense food odor, the "brain-gut axis" in the body will send signals to curb the activity of "Sirtuins protein"(a key factor in the regulation of biological energy metabolism), so that the effect of DR on longevity is reduced by at least 50 percent. In June, researchers from the University of Michigan published an article in Nature Communications, saying that food odor can increase serotonin and dopamine levels in the body and suppress fmo-2 gene activity in the brain, thus reducing the longevity effect of dietary restraint.

The fmo-2 gene encodes a specific enzyme: flavin-containing monooxygenase-2, which is sufficient and necessary to prolong nematode lifespan downstream of DR. The thing is, we know, from this study, that the level of fmo-2 expression is relatively high in worms under DR. The researchers tagged the gene with fluorescent markers and one could see them flare up like lanterns on a dark night (Figure 1). Miraculously, the strength of fmo-2 expression waned severely when worms could smell but not eat food. Therefore, something must be going on within the nervous system of those worms to induce such a significant physiological response. The first things coming to their minds: serotonin and dopamine signalings. 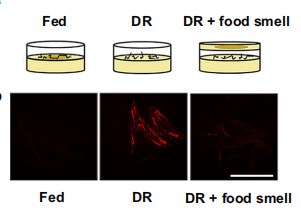 The researchers said, "Serotonin and dopamine are major players in the reward part of the brain and tend to be involved in satiety and food response signaling.". Serotonin and dopamine antagonists were capable of restoring fmo-2 expression suppressed during food smell trials. Neurotransmitter antagonists mianserin (for serotonin), thioridazine and trifluoperazine (for dopamine) were used for the trials, and these substances showed significant effects in restoring the suppressed fmo-2 expression in “food smell” environments, thereby extending lifespan (Figure 2.). 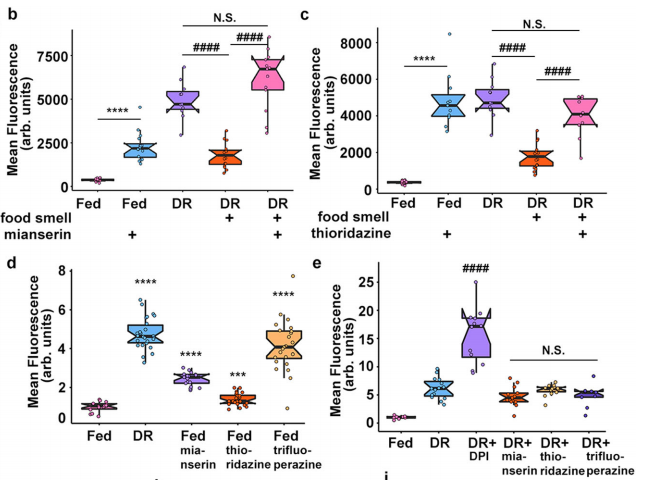 Figure 2. fmo-2 expression under different environments with and without serotonin and dopamine antagonists.

To explore more mechanisms of action, the researchers working with ser-1 and ser-4 knockdown strains, they reported that these were the only two serotonin receptor orthologs that were required for the “rescue effect” seen when mianserin was employed. Meanwhile, the observation that ser-4 RNAi slightly but significantly increases fed lifespan and prevents DR from extending lifespan. The results show that mianserin could act to mimic DR by antagonizing the serotonin signaling which happens during feeding. Similarly, they found that thioridazine, a dopamine receptor antagonist, acts by targeting dopamine receptor D2 (DRD2) to achieve a similar effect induced by DR. Interestingly, it seems that neither mianserin nor thioridazine worked alone because further trials concluded that both serotonin and dopamine signaling are epistatic to each other and are each required for full induction of fmo-2 under DR.

It may sound all too perfect that you can just circumvent the tough part of dietary restrictions and get straight to the benefits it offers. Wiser men would know that it’s a fool’s errand to chase after such a dream. These drugs have many potentially dangerous side effects, but they provide important clues about the fmo-2 gene expression pathway and its role in prolonging life. As we get deeper and deeper down each rabbit hole, it’s possible that we may eventually find a way to “hack” through the traditional wisdom, for now that we have a better understanding of what’s hiding under the surface. It’s important to recognize that many of today’s breakthroughs could not have been made if they weren’t for the tools we have at hand. C.elegans offer exactly such a good platform, as SunyBiotech contributed in this article. One should have confidence to see more lights coming our way.