Introduction to the C.elegans Models of Parkinson’s Disease

Alzheimer'sdisease(AD), Parkinson’s disease (PD), and amyotrophic lateral sclerosis (ALS) are three of the major neurodegenerative diseases. The prevalence and incidence of these diseases rise dramatically with age. Some research shows that these diseases have become more prevalent in recent times, partly due to an increase in the elderly population across the globe. Naturally, we look for cures, but so far, the path’s been winding and unforgiving.

In today’s blog post we’d mainly go through a review paper talking about how C. elegans through the years have been developed as a solid platform for drug development, modifier screening, and many other branches of research for Parkinson’s disease. I believe, in the end, we’d all come to appreciate how much insight this little transparent worm has offered us.

PD is a neurodegenerative disease characterized by selective degeneration of neurons primarily in the region of substantia nigra. Being the second most prevalent neurodegenerative disease, PD presents itself with the symptoms of constant resting tremors, impairment of balance, bradykinesia, and other non-motor ones such as dementia and depression. In terms of pathogenesis, what we know so far is that the main culprit would be the damage and loss of quantity and function of the dopaminergic neuron cells. And at the cellular level, the disease is characterized by intracellular aggregation of a type of protein called α-synuclein into Lewy bodies. Like for cancer, researchers used to believe that PD was solely caused by damage to the cells induced by environmental stress and the natural degradation of body functions through the progression of age. However, work in the past two decades has demonstrated that genetics actually plays an important role here. Currently, it is estimated that 15% of all PD cases are familial and several key genes like SNCA/PARK1, which encodes α-synuclein, are currently being studied. With each new gene that is implicated in PD comes the opportunity to learn more about the cellular pathways involved in disease pathogenesis.

Right, so how come C. elegans beneficial to the research? One of the greatest advantages of C. elegans as a model organism is the ease of genetic manipulation and the wide array of genetic tools (like CRISPR-Cas9) available. Thanks to its fast generation, large brood size, and a general lifespan of 2-3 weeks, C.elegans is incredibly easy to manipulate and many researchers take a liking to it when it comes to research projects related to genetics. C. elegans have a well-defined, invariant nervous system with exactly 302 neurons. The connections of all neurons in C. elegans have been mapped using electron micrographs there by providing the most complete nervous system connectome of any organism. While one of the biggest advantages of using a simple genetic model organism for the study of Parkinson’s disease is the ability to perform large-scale screens.

(1) SNCA/PARK1/PARK4, the first gene to be definitively linked to familial PD, encodes α-synuclein, a protein involved in synaptic vesicle formation. Although C. elegans does not have a homolog to SNCA, several worm models have been generated by expressing human wild-type or mutant α-synuclein either ubiquitously or in specific tissues.

(2) Another example would be models for leucine-rich repeat kinase 2 gene, LRRK2. Mutations in LRRK2 have also been shown to cause autosomal dominant PD. In C. elegans, researchers target lrk-1, the C. elegans homolog of LRRK2. The lrk-1 gene is expressed broadly across the worm body and also in neurons, in which it associates with the Golgi apparatus.

Table 1 shows some of the two different transgenic C. elegans models mentioned above. 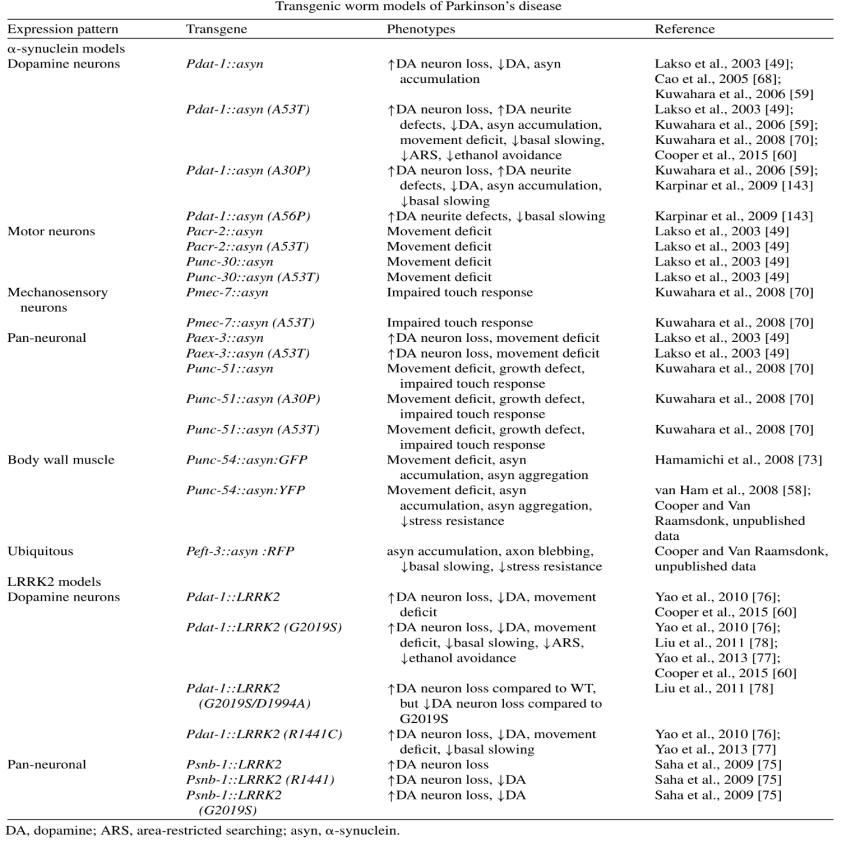 (3) Mutations in PRKN/PARK2 result in an autosomal recessive form of PD with an early age of onset. Parkin is encoded in C. elegans by pdr-1, which encodes an E3 ubiquitin ligase involved in protein degradation and mitophagy.

(4) Mutations in PINK1/PARK6 cause an autosomal recessive form of PD with early disease onset. PINK1 (PTEN-induced putative kinase 1) is a mitochondrial kinase that acts with Parkin in mitophagy.

(5) Mutations in the DJ-1/PARK7 gene cause a recessive form of PD with an early age of onset.  DJ-1 is a deglycase that has been shown to protect against oxidative stress.

The above four genetic loss of function C. elegans models in Parkinson's disease can be referred to the information in Table 2. 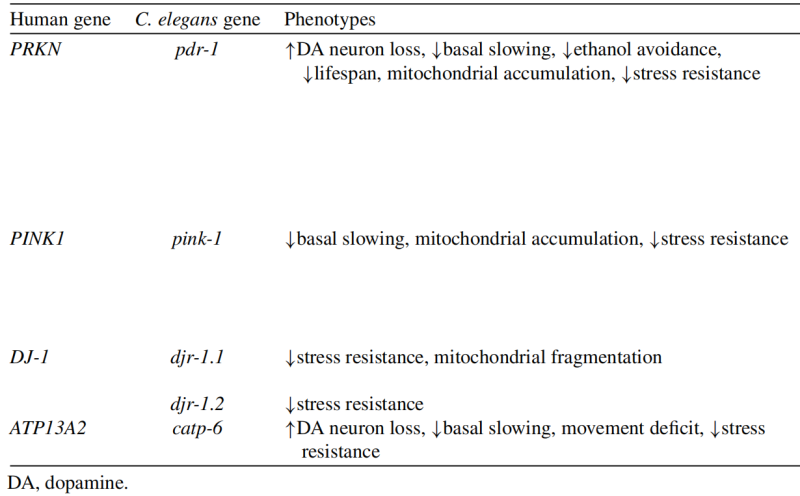 Other than genetic models, we’ve also seen the development of toxicant models in which scientists would use neurotoxins to induce damage to dopaminergic cells to mimic the symptoms observed in PD. Such models are quite helpful when it comes to the development of therapeutics, which further leads to drug development for humans.

Of course, it’s not to say that C. elegans models come without any limitations. There are still many obstacles laying ahead. There’re problems like that C. elegans lacks an ortholog to α-synuclein and that the conservations across species are not always as predicted. Despite all these, one just cannot deny that the C. elegans platform is still a rather all-rounded one and there’s still much to be expected from it.