Numerous human disorders, like Alzheimer’s and Parkinson’s diseases are associated with the aberrant aggregation of proteins. In most cases, these disorders are still incurable. And among these misfolded and aggregated protein species, the small oligomeric forms are thought to be highly cytotoxic. An article published in July this year in Scientific Reports, described an investigation of the mechanisms of toxicity associated with oligomeric species form ɑ-synucleinand HypF-N by using C. elegans as a model organism.

Escherichia coli HypF-N is a valuable model system for investigating the cellular dysfunction caused by misfolded protein oligomers.HypF-N can be converted into two different types of oligomers, denoted type A and type B, where the former is toxic and the latter is not. Type A and type B HypF-N oligomers exhibit different toxicities in C. elegans and the toxic mechanisms were found to be through the gut lumen. As predicted, the type-A Hypf-N oligomers caused more significant toxicity compared to that of the type-B oligomers. It was manifested through the degree of impairment on the worms’ physical performance such as the swimming speed and the rate of paralysis, causing reduced general motility(Figure 1A). Type-A oligomers were also found to trigger a significant production of reactive oxidative species(ROS) while the effects elicited by type-B and the native Hypf-N oligomers were almost negligible(Figure 1B).

Figure 1. The effects of different types of oligomers on worm fitness.

The researchers next turned to investigate the mechanism behind the above observed phenomena. By tracing Hypf-N oligomers labeled with fluorescent dyes(5-FITC), it was found that both type A and type B oligomers were rapidly ingested by the worms, but only type-A oligomers were able to pass through the intestinal membrane and diffuse into nearby tissues(Figure2). However, in a cellular system, a molecular chaperone αB-crystallin that has been shown to be protective against the toxicity of type A oligomers is incubated with HypF-N oligomers, a significant increase in the fitness of the worms can be observed. This result shows the strong link between the properties of the intestinal cells of the worm and their health and lifespan, pointing at the importance of this entry route for oligomeric species in this system. 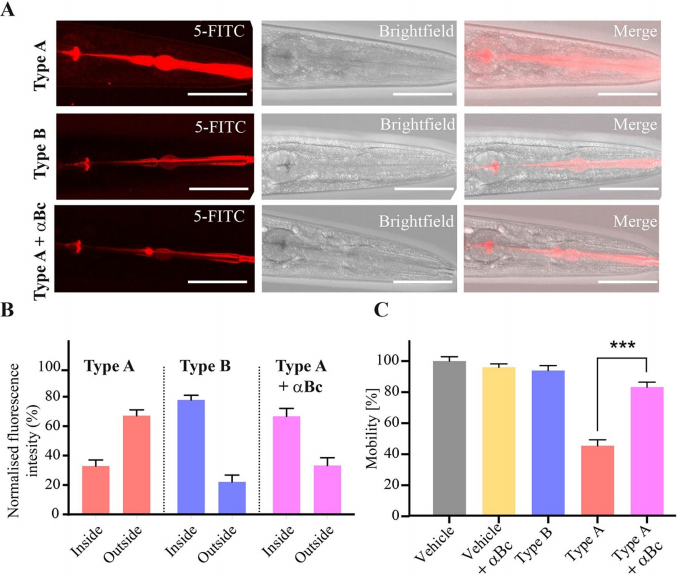 Figure 2. Fluorescent signal distribution of the three types of oligomers and the resulting motility analysis.

In order to explore further the link between the location of the oligomers within the worms and their toxicity, and to assess the degree by which such toxicity arises from the ability of these species to cross the intestinal cell walls, the researchers incubated the worms with a toxic type B α-synuclein oligomers. Previous studies have demonstrated the dominant role of α-synuclein gene mutations in familial Parkinson's disease. The results of this article also show the dose-dependent toxic effects of this oligomer on C. elegans (Figure 3A). However incubation of α-synuclein oligomers with small therapeutic molecules such as aminosterol squalamine, suppresses dramatically the oligomeric toxicity in this system (Figure 3B). Thus, it can be found that co-incubation of oligomers with certain molecular chaperone proteins can significantly reduce the ability of oligomers to permeate the gut walls in order to inhibit their toxicity.

Figure 3.Effects of the exposure to type B α-synuclein oligomers on the worm fitness.

It was demonstrated in this paper that misfolded protein have different abilities to gain access from the gut lumen to specific types of tissues in C. elegans. Some scholars believe that Parkinson's disease may in certain cases originate in the gastrointestinal tract  before progressing to the brain. The results of this paper support this idea to some extent. With the findings, we are one step closer to understand how nerve cells are affected by different sorts of mechanisms, and hopefully this will eventually lead to our tackling the diseases like Parkinson’s.