It’s almost known around the globe that tea is a nature health beverage. Tea and health has always been a hot topic of scientific research in the international tea industry. We often see words like “antioxidant”, “anti-inflammatory and antibacterial”, and “hypoglycemic” used to describe the efficacy of tea, but it  still lacks more data to support whether tea can actually strengthen the body.

On October 21,Chatrawee Duangjan and Sean P.Curran published a paper in GeroScience titled“Oolonghomobisflavans from Camellia sinensis increase Caenorhabditis elegans lifespan and healthspan”.In the article,the authors scientifically verified the possibility of oolong tea and its extracts in improving the lifespan and healthspan of worms through exhaustive experimental data,  using C.elegans as a model organism. The main materials used in the experiment were oolong teas with different fermentation levels(QFT,NFT, CFT) and two specific compounds isolated from the oolong tea extract, the oolonghomobisflavan A and B(OFA &OFB).

It was found that both oolong tea and its extracts can increase lifespan to some extent in C. elegans. The alh-6(lax105) proline catabolism defective mutant animals (lead to premature aging phenotype) exhibited better lifespan extension than wild-type animals that were subjected to the same QFT, NFTand CFTtreaments(Figure 1.a-b). In the meantime, increased life span was observed in both wide-type an salh-6(lax105) mutant animals treated alone with OFA and OFB(Figure 1.c-d), suggesting that OFA and OFB are likely to be the active substances in oolong tea extract that enhance lifespan in C.elegans.

It’s not just the lifespan that’s been improved, the healthspan of the nematodes was also found to have been boosted. Pharyngeal pumping rate(PPR) was used here as the biomarker for assessing bioactivities. PPR is a well-established biomarker of aging, as they progressively decline with the animal’s age. Age-related decline in PPR was delayed when both the wild-type and the alh-6(lax105) strain were exposed to oolong tea extracts(Figure 2). The PPR performance on the alh-6(lax105) treated with oolong tea extracts was observed to have been restored to the same level as that of the wild-types. Similar results were observed when other biomarkers related to aging were used. In conclusion, oolong tea extracts and oolonghomobisflavans can improve multiple health measures over the lifespan in wild-type animals and can reverse the accelerated decline in multiple age-related phenotypes of the animal. 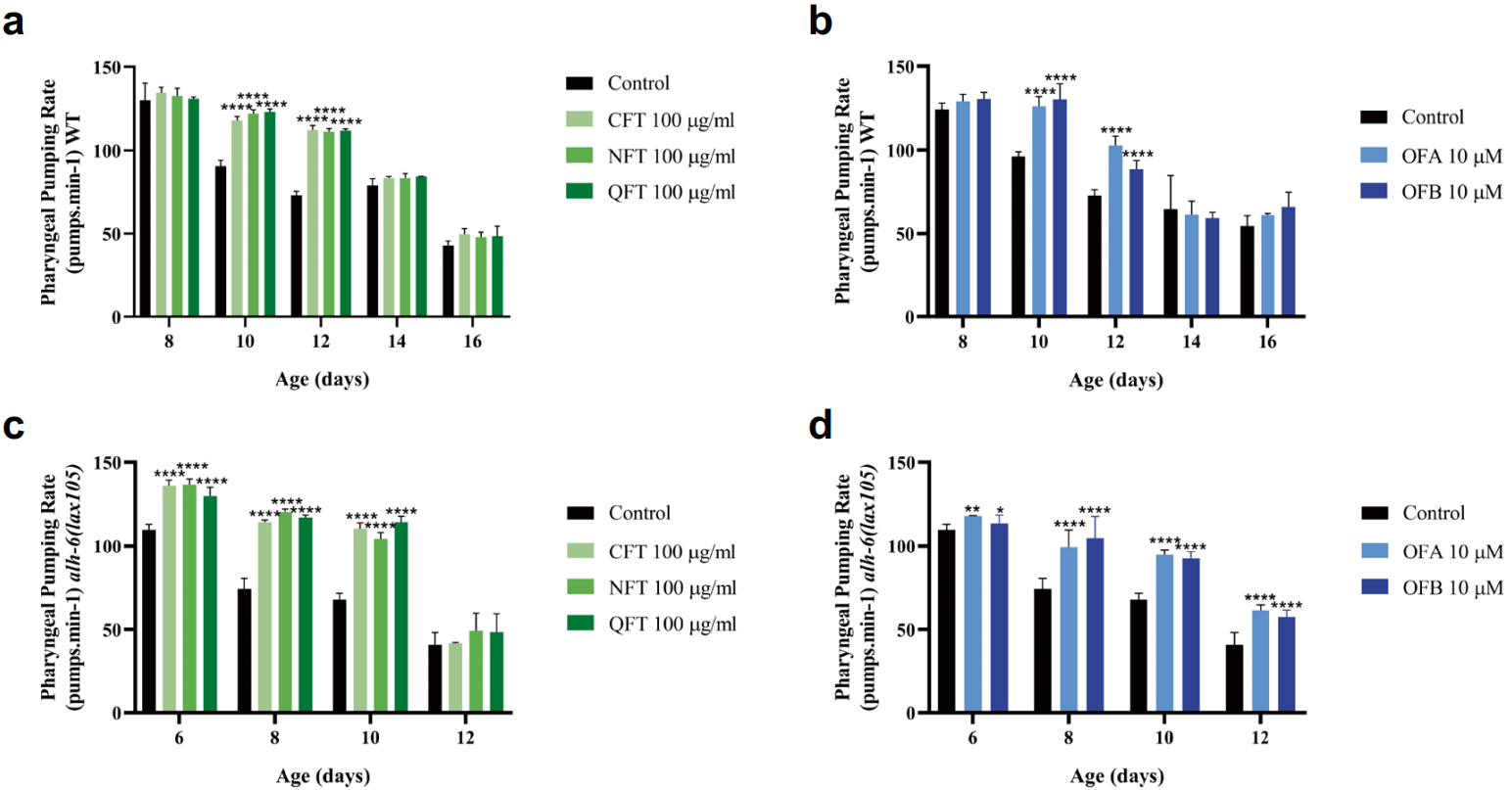 The resistance to oxidative stress is often considered as of vital importance to an organism’s survival and such ability often declines with the aging process.The authors found that treatment with these oolong tea extracts could significantly increased the survival rate of both wild-type(Figure 3a-b) and alh-6(lax105)(Figure 3.c-d) worms under juglone-induced oxidative stress conditions. In an in-depth study of the molecular pathways mediating the effects of oolong tea extracts on C. elegans lifespan and healthspan, the researchers found that these compounds could increase nuclear location of the DAF-16 pathway and thus extend lifespan (Figure 3.e-f). The DAF-16 transcription factor functions by relocating itself toward the nucleus when promoted to activate the genes required for stress adaptation. It was suggested by the results of the experiments that both oolong tea extract and OFA/OFB have the ability to enhance the DAF-16 transcriptional activity, which is an evidence for an improved resistance to stress.

OFA and OFB are neuroprotective

Figure4. OFA and OFB are neuroprotective and delay protein aggregation.

Before the age of science, people already had the vague but solid idea that something medicinal must hide within the little green leaves, including the alleviation of pain, a boost of energy, and observed prolonged longevity of those elders drinking this magic potion. The scientific discovery is less poetic, but it nevertheless adds more and more evidence favoring tea’s beneficial properties, and yet, the list is still growing.