C. elegans learning in a structured maze is a multisensory behavior

C.elegans were shown to display learning capabilities in the presence of external stimulus sources such as food. This paper reveals that in a single training session, C.elegans were able to use a combination of chemosensation, mechanosensation, proprioception, and environmental information to track a food source and learn to replicate this foraging behavior in a new but similar environment.

A T-shaped maze made through 3D-printing was adopted in this research as the physical environment(Figure1).The maze was designed to have a continuous rough floor surface to give the  nematodes physical contact feedback. And the smooth-surfaced maze was designed to investigate the role of mechanosensory feedback.

Figure1. The T-maze arena and the basic (reference) Control and Training/Testing experiments.

The researchers introduced a decision index (DI) to quantify the behavioral outcomes of the C.elegans in each experiment. For each maze experiment, a higher positive DI meant that a higher proportion of C.elegans successfully found food in that experiment. The researchers also used the chemotaxis index (CI) to indicate the performance of C.elegans in the training maze (with food at one end of the maze), with higher positive CI values indicating a higher proportion of C.elegans that successfully found food during the training. The learning index (LI) then shows the final performance of  C.elegans in the post-training test session.

Using a T-shaped maze without food as a basic control, researchers conducted a basic training/test experiment to verify whether the presence of food at one end of the maze affected the navigational behavior of C.elegans(Figure 2). The results showed that there is a strongly biased navigational outcome when food is placed at one end of the maze (scoring a chemotaxis index CIBasic = 0.69). C.elegans that located the food in the training maze were placed in a similar maze that contained no food (testing maze) a second time, most of them reached the side of the maze that had previously held food. This biased behavior is thought to be an indication of learning, which comes as a result of C. elegans prior experience. More experimental results showed that the location of the food was necessary for C.elegans learning in the maze, no bias occurred if the C. elegans experienced an empty maze. 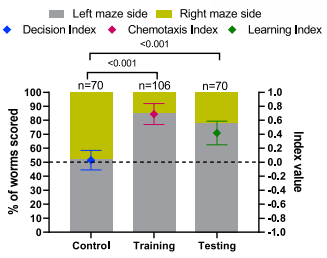 In experiments investigating the effects of other mechanisms of C.elegans learning in mazes, it was very evident that learning worms do not migrate based on cardinal directions (Figure 3A). According to the report, C. elegans prefer for obtuse over acute angles in two-option junctions. However, in the presence of food stimuli in the maze, C.elegans were able to restrain their aversion to sharp angles to successfully reach the end with food. And learning in the maze was sufficient to make C. elegans overcome an inherent bias (Figure 3B), as it could shift the behavioral outcome of nematodes under the actual environmental input. This could be indicative of evolutionary prioritization of needs, since learning of a potential food location might be considered high priority in a given environment. However C. elegans tested on the smooth maze did not show any learning ability (Figure 3C), suggesting that maze learning requires tactile input (as well as proprioception).

Figure 3. Characterization of C. elegans learning in the maze environment

The experiments designed to explore the retention of learning information by C. elegans revealed that the nematodes had a rather small capacity of “working memory”. In the first scheme, namely the training-interval-testing experiment (Figure 4A), we could find that time passed in combination with change of environment results in loss of learning. While in the second training-sequential testing experiment (Figure 4B), it was observed that C. elegans did not retrieve the learned information a second time when they were tested continuously. The researchers hypothesized that it is either that C. elegans do not hold on to the learned information long enough or that the first testing session became another kind of training session, overwriting the previous training. But through the third training-stay-testing experiment (Figure 4C), it was obvious that time passed without change of environment does not result in abolishing learning. However the longer the C. elegans stayed in the training maze, the less memory learning ability they showed in the testing maze. The findings that learning is very short term and sensitive to distraction imply resemblance to a form of working memory.

A variety of genetic compositions determining the nematodes performance in  chemosensation, mechanosensation, and proprioception was investigated to reveal the mechanism behind C. elegans learning. Several strains with sensory defects were selected for testing. The results suggested that defections resulted from genetic makeup in either chemosensation or mechanosensation could significantly impair the ability of C. elegans to locate food sources, and then affected their learning ability or overall maze performance (Figure 5A-B). However, proprioception was revealed to be of critical importance for C. elegans learning in the maze, but not for food location (Figure 5C). CREB (cyclic AMP-response element binding protein) is known to be required for associative learning in C. elegans. In addition, dopamine plays a key role in C. elegans neuronal plasticity and mechanosensation-mediated learning. When dop-3 mutants that lack the dopamine receptor DOP-3 were tested, they did not locate food effectively and consequently showed no learning (Figure 5D). Also, age and starvation similarly affected the learning potential of C. elegans. Such findings fit with the big picture across the field that a well-established life span extending dietary regimen (dietary restriction through food deprivation) can significantly delay the process of declining physiological performance. 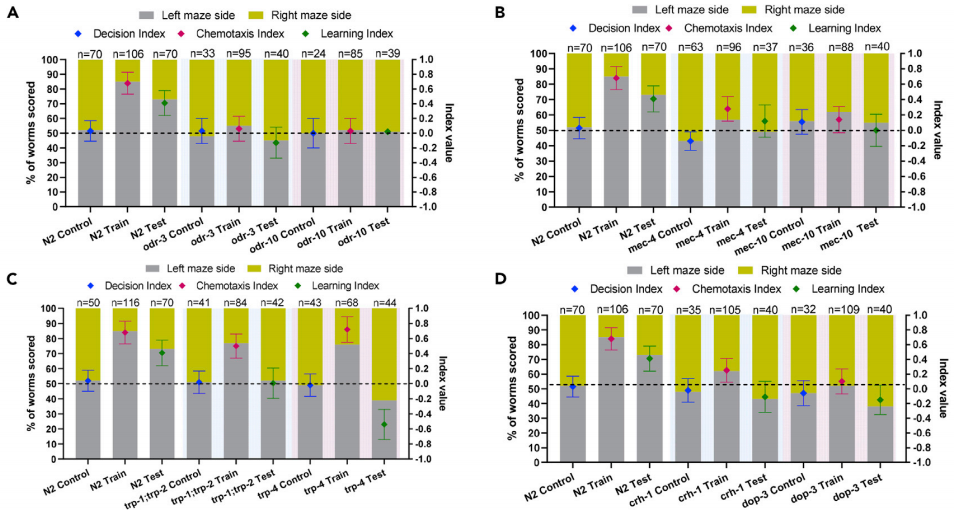 Based on these findings, it is safe to say that C. elegans learning is a multi-sensory process by engaging multiple sensory modalities.