For humans, the battle against neurodegenerative diseases is long and arduous. Diseases like Alzheimer’s and Parkinson’s have been hanging over people like the sword of Damocles for ages. Even now, we are still helpless to deal with most human neurodegenerative diseases. Surprisingly, pathological neurodegeneration has been found not only among mammals such as humans, but also in the lower organisms ofC. elegans. Hence, based on similarities between the underlying cellular and molecular mechanisms of C. elegans and humans, C. elegans turned out to be one outstanding research model for exploring strategies to against those diseases.

This paper describes a general method for studying age-dependent neurodegeneration using C. elegans. It focuses on the neuroprotective role of heat shock pretreatment in several models of neurodegenerative diseases. It was previously found that short-term exposure to sub-lethal temperatures could induce resistance against necrotic cell death. The hypothesis was put to the test using C. elegans models like the ones with deg-3(u662) and mec-4(u231) mutations where hyperactivated ion channel-induced necrosis could be found. In another model to study protein aggregation-induced neurotoxicity, daily preconditioning of C. elegans with a mild elevated temperature also protects against neurodegeneration.

The relative strains of C. elegans were selected and cultivated under the given parameters. The data was then collected and analyzed. Compared to the control, which was cultivated under the standard condition of 20℃, the group of C. elegans that went through a brief heat shock session of 34℃ and 25min during the incubation was found with a diminished number of necrotic cell death among neuron clusters(Figure 1.). In the protein aggregate-induced neurodegeneration experiment the researchers found that heat shock preconditioning promotes neuroprotection against α-synuclein-induced cell death in 7-day-old adult hermaphrodites(Figure 2.). 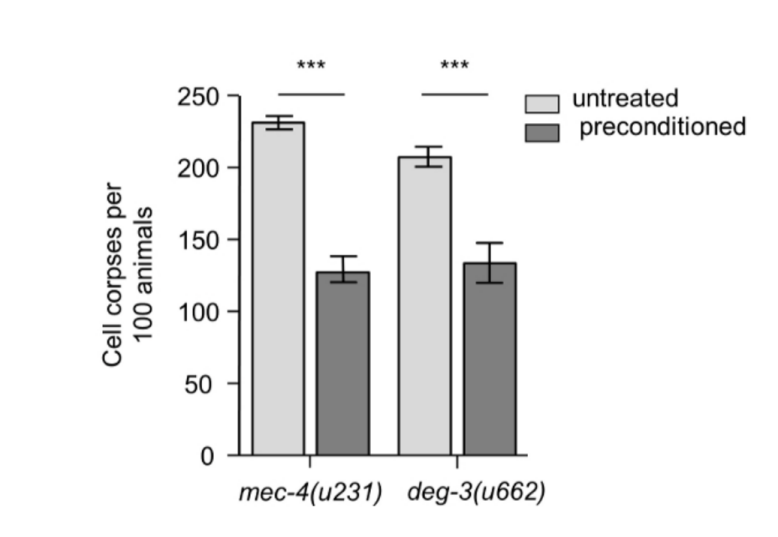 Figure1.Number of neuronal cell corpses at the L1 larval stage of development, per 100 animals carrying the neurotoxic mec-4(u231) or deg-3(u662) alleles. Necrotic cell death is suppressed in L1 larvae hatched from preconditioned eggs compared to untreated counterparts (n= 100 animals per genotype and assay