Color perception in C. elegans - "seeing" light even without eyes

The C. elegans as a tiny organism, lives in the soil all year round and feeds on bacteria. As early as 1998, the C. elegans genes were fully decoded. So far six scientists have been awarded the Nobel Prize for their research on C. elegans. Although C. elegans are very tiny, with the adult being only 1.5 mm long, it still possesses a robust nervous system. Researchers have discovered through the nematode's nervous system that it has the senses of touch, taste, smell, and even proprioception, which is the ability to perceive its own body movements. In general soil-dwelling animals are dark-loving and light-phobic, and C. elegans do not even have eyes, light-sensitive cells or the optic protein gene that underlies the function of the typical visual system. Surprisingly, however, C. elegans respond to light, and visible light can influence physiology and behavior of C. elegans. A paper published in Science in March this year showed how the eyeless C. elegans directs its foraging behavior by discriminating colors, which may be a completely new way to see the world.

P.aeruginosa is widely distributed in nature and is one of the most common bacteria present in soil. It has been shown that P. aeruginosa secretes a unique blue toxic substance-pyocyanin, which causes slow growth and even death in C. elegans. Researchers have observed that C. elegans begin to avoid the pathogenicPseudomonas aeruginosa PA14 bacterial lawns after a few hours of feeding on it. This avoidance is enhanced by white light exposure, but slows down if the surroundings are very dark (Figure 1A-B). Previously, C. elegans have been shown to use LITE-1 and GUR-3 proteins to detect and respond to short-wavelength light by a mechanism similar to that of insect gustatory chemoreceptors. The degree of avoidance of PA14 by the lite-1 null-mutant worms are then unaffected by white light. Dr. Dipon Ghosh of Yale University concluded that the nematodes were able to determine whether their food was too toxic to eat by distinguishing the color of these colored lawns. However, when PA14 was replaced by the mutant strain PA14∆phzM, the effect of white light irradiation on C. elegans avoidance was minimal, although the mutant was still able to synthesize an amber-colored toxin (Figure 1C-D). Thus, the light-dependent enhancement of nematode avoidance of PA14 requires the simultaneous presence of lite-1 and pyocyanin. 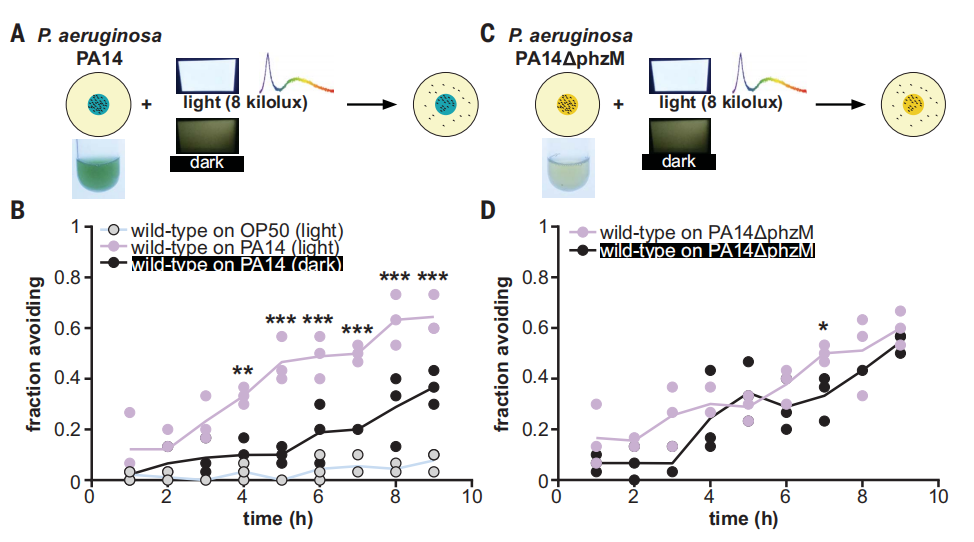 The C. elegans are able to perceive the world through color, and white light can promote their foraging behavior. So what causes blue to trigger the avoidance behavior of C. elegans? Dr. Ghosh used two colors of LED lights, one blue and one amber, to irradiate the C. elegansby controlling the ratio of light wavelengths without changing the total energy delivered to the C. elegans during the period. To simulate the environment of the toxin-containing lawns, the researchers added the non-toxic OP50 lawns with the aversive odorant 1-octanol as a way to meet the C. elegans foraging avoidance conditions. The final experimental results showed that the C. elegans avoided the bacterial lawns only when their overall environment was bathed in light with a specific blue/amber ratio (Fig. 2). This suggests that the relative intensities of blue and amber visible light can guide C. elegans foraging decisions and confirms that C. elegans can discriminate colors. 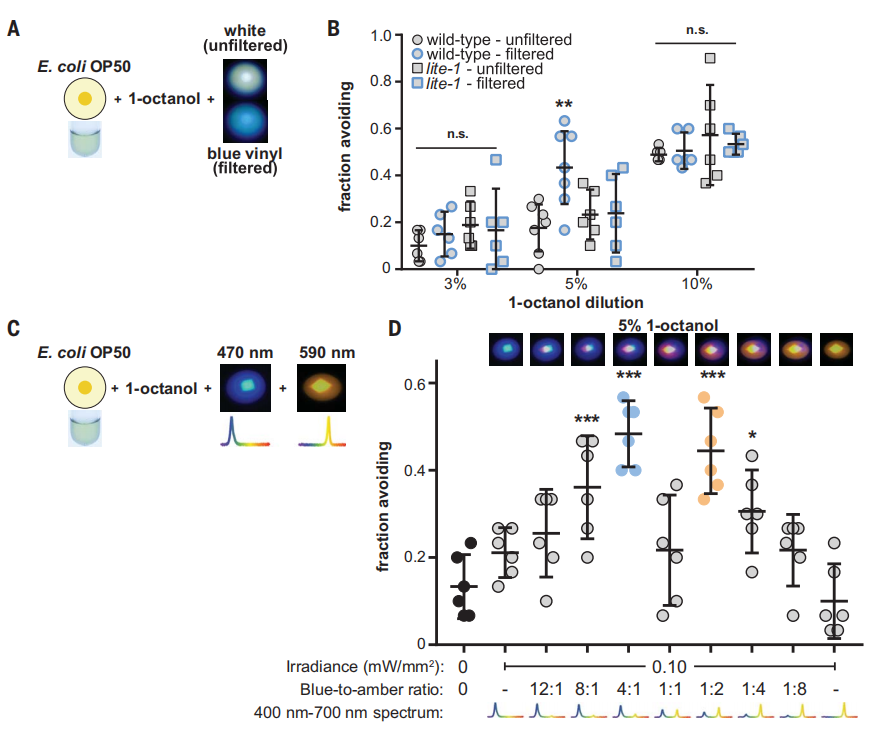 Fig. 2. Foraging is guided by the relative intensities of blue and amber light.

As the experiments were scaled up, researchers found that different C. elegans strains exhibited different color sensitivities, suggesting a complex and potentially distinct mechanism underlying color-specific sensitivity (Fig. 3A). To dissect how spectral discrimination and 1-octanol avoidance contribute to color-dependent foraging, the researchers tested the avoidance of lawns illuminated with 4:1 and 1:2 blue-to-amber light, with and without octanol, by these strains. Strains such as N2, which is relatively color-insensitive, requires the presence of additional aversive stimulus to produce color-dependent avoidance, while exceptionally color-sensitive strains such as CX11276 requires only color-specific illumination, and NIC2 was able to avoid lawns in the presence of 1-octanol even without light. These results demonstrate that differences in color and odor sensitivity in nature drive differential foraging across strains (Fig. 3B-E). By considering multiple adjacent single-nucleotide polymorphism (SNPs) within a given genomic region, Dr. Gohosh's team identified and analyzed two genes jkk-1 and lec-3 that contribute to these color-dependent foraging variations. Although these two genes perform many important functions in a variety of organisms, including humans, they are both involved in helping cells cope with damaging molecular pathways that help cells cope with the stress caused by UV light. With the current experimental progress, genes like jkk-1 and lec-3 may function in a spectrally sensitive stress response pathway independent of the retina to guide nematode foraging decisions for food sources that differ in color and toxicity (Fig. 3F), but a more specific mechanism of action awaits further analysis. 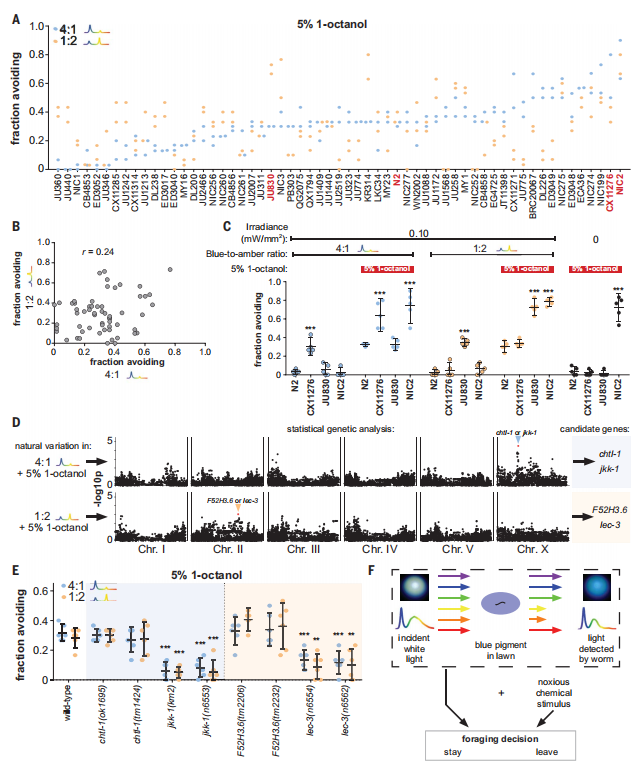 Nature is always so wonderful, in the dark soil, C. elegans feel the light, they "see" the color; and now, scientists also see their world of light, and we will continue to explore more unknownto decipher the deeper world.