Cancer has become one of the serious threats to human health, and its treatment has become the focus of global medical strategy. Cancer metastasis is an important reason for its high lethality. Generally, cancer cells will normally proliferate or invade bodies[1], and enhanced cell invasiveness is a feature of cancer metastasis[2]. Cancer cells metastasis begins from invading and penetrating through the basement membrane to get into body cavities, blood, etc., and then invading new tissues and organs, such as the liver, brain, and lungs, destroying its functions and eventually causing death. Therefore, understanding the mechanism of cancer cells metastasis can offer important targets for the development of new drugs to inhibit cancer metastasis.

The first step of invasion is that cancer cells pass through the basement membrane, which often occurs in the deep tissue layer and is difficult to be visualized. SunyBiotech’s client, professor David Q. Matusand and his team, of State University Of New York-Stony Brook, intelligently utilizing the morphogenesis of C. elegans uterus-- Vulvar connection morphogenesis as an easy to operate and easy to observe model to study cell invasion in the body[3]. The cells that can invade the basement membrane in this model are called anchor cells. The team found that during the development of nematodes, there exists a complex gene regulatory network to ensure the normal differentiation and invasion of anchor cells. 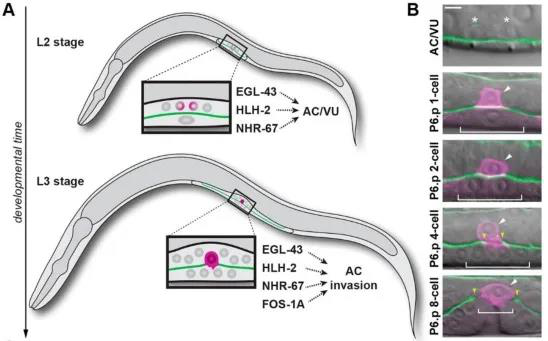 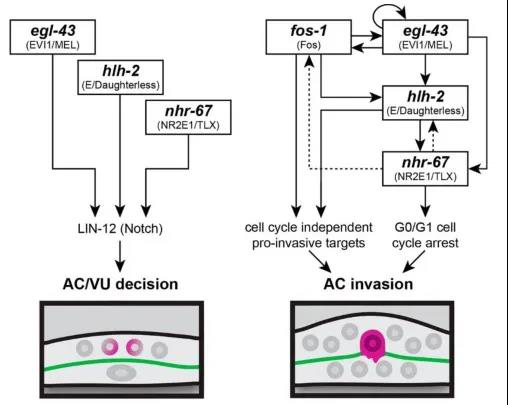 In summary, transcription factors independently regulate the differentiation of AC / VU anchor cells mediated by Notch signals, and then a gene regulatory network can be quickly assembled to enhance AC invasion.

If you have a need for customized C. elegans gene editing, please feel free to contact SunyBiotech!