Recently, the outbreak of corona virus in Wuhan has arose wide concern around the world. 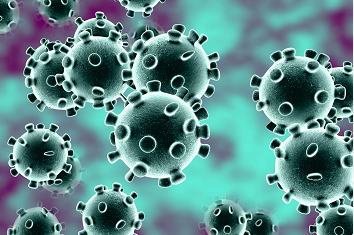 In fact, the more terrifying is fear rather than infectious diseases. Therefore, the key point is to improve our immunity and exercise regularly. As is known to us all, infectious diseases can not only be caused by virus, but also bacteria, and even parasites. How to enhance our body and the further understanding of the mechanism of the body resists invasion of foreign pathogens is exactly what scientists have been pursuing for thousands of years. Human beings have developed for millions of years, and have formed a powerful and precise cooperative natural immune regulation system. This immune system contains tens of millions of lymphocytes and non-specific bactericidal substances. Peroxidase is one of the lymphocytes in these tens of millions. The immune system uses hydrogen peroxide to catalyze the oxidation of the substrate, thereby exerting a detoxifying effect. For example, the recent PLOS journal published a story about the nematode "guard" serotonin peroxidase HPX-2 which protects C. elegans from some pathogens.

In 2014, Tiller GR and some other researchers cut off one gene of HPX-2, they used biotechnology to remove the active functional region of HPX-2, so the sensitivity of nematodes to the pathogen E.faecalis increased significantly[1]. In other words, HPX-2 is a powerful weapon for the nematodes to resist invasion of pathogenic bacteria.

This powerful“weapon” can be found in nematodes and appears in the nematodes bodies. As shown in Figure 1, the green fluorescence is the “birthplace” of HPX-2, which is in the pharyngeal and epidermal surface of the nematodes. 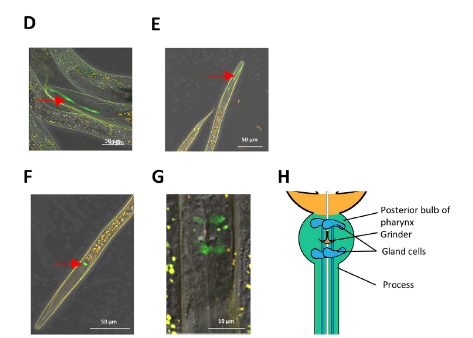 Figure1: HPX-2 expression in epidermal and pharyngeal of nematodes

HPX-2, the nematodes "guard", fights against the pathogens. But how does HPX-2 works? It turns out that HPX-2 is involved in the maintenance of the cuticle integrity of the nematodes. As the first wall of the defense system, the cuticle of nematodes is just like human skin which protects body from harm, so the importance of HPX-2 is obvious.

Next, let’s go back to the aforementioned Tiller GR and some other researchers who knocked out the active functional region of HPX-2. Their purpose was to confirm the role of HPX-2, but it seems too “cruel”to cut off its gene. SunyBiotech adapts a “milder” way to perform amino acid point mutations on the active catalytic site of nematode HPX-2. The overall integrity of HPX-2 is preserved, and the resulting nematode strain is hpx-2 (syb482). There is a certain degree of amino acid conservation among different peroxidases[2-4], as shown by the red mark in Figure 2. HPX-2 (syb482) is a small surgery on the HPX-2 peroxidase active domain, which mutates 372 arginine (R) to alanine (A). 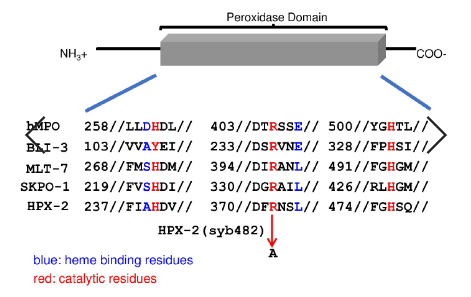 Since we edit on the HPX-2, naturally it will react on it. This reaction is the resignation of the "guardian" function. There is no one to protect nematodes from attacking of pathogens. Therefore, when hpx-2 (syb482) is exposed to the pathogens, due to the lack of protection, the survival rate of nematodes significantly reduced. 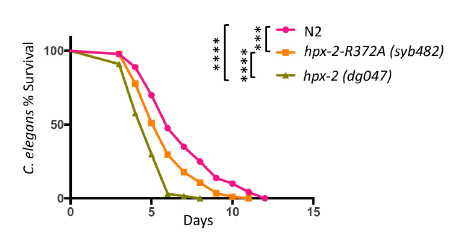 The last story illustrates that HPX-2 expresses in the epidermis and pharynx of nematodes and participates in maintaining the structural integrity of the cuticles of the nematode, protecting the nematodes from attacking by pathogens. Once the danger comes, it will put all efforts to resist it.