Modulation of C. elegans’ sensory perception by hydrogen peroxide that enable the nematodes to find a niche with food and safety

Hydrogen peroxide is known as the most common chemicals employed by various bacteria, fungi, and other microorganisms as a means of defense and prey. C. elegans living among these microorganisms have over time developed a system of sensory perception sensitive to chemicals like hydrogen peroxide that allows them to navigate effectively toward sources of food, in the meantime stay safe. The article we share here reveals how the C. elegans selects the right niche through the modulation of sensory perception by hydrogen peroxide.

The bacterium E. coli, the food source of C. elegans under standard laboratory conditions, degrades environmental H2O2 primarily by expressing two catalases, KatG and KatE, and the peroxiredoxin   AhpCF plays a minor role. So does the presence of H2O2 change the bacterial food preference of C. elegans?

There searchers developed a model ecosystem that gave the worms the "free will" to choose which lawn of bacteria food they prefer(as they were left in the middle to start, Figure 1A).In this experiment, two different E. coli strains were used as food sources, the normal phenotype E. coliMG1655 and the mutant strain E. coliJI377(E. coli JI377 is a mutant strain that is dysfunctional in katG, katE, and ahpCF enzyme production, rendering it incapable of breaking down environmental H2O2).The results collected from the trials suggested that C. elegans, in an environment free of H2O2 presence, showed a slightly higher preference toward MG1655 strain, but the difference was much starker in the trial where H2O2 was present and the nematodes retreated from the lawn whose H2O2 level remained constant(Figure 1B). The same results were observed for one of C. elegans distant relative, C. briggsae, and to even a greater extent(Figure 1C). We know that C. elegans in their natural habitats (they are in essence a kind of earthworm) encounter many other types of microorganisms of which they feed. The researchers then went on to test a variety of bacteria, with varying H2O2-degrading abilities due to their different genetic makeups, to see if similar results would be observed. It turned out as expected. The chance of a feeding C. elegans turning away from a food source that’s weak in breaking down H2O2 was much higher than that of one with stronger H2O2 degrading capacity, and further confirmed that environmental H2O2 served as a strong influential matter to C. elegans’ behavior in foraging(Figure 1D,E). Since it was previously confirmed that a high level of H2O2 would cause DNA damage to the nematode, such behavior was understood as one shaped through evolution. 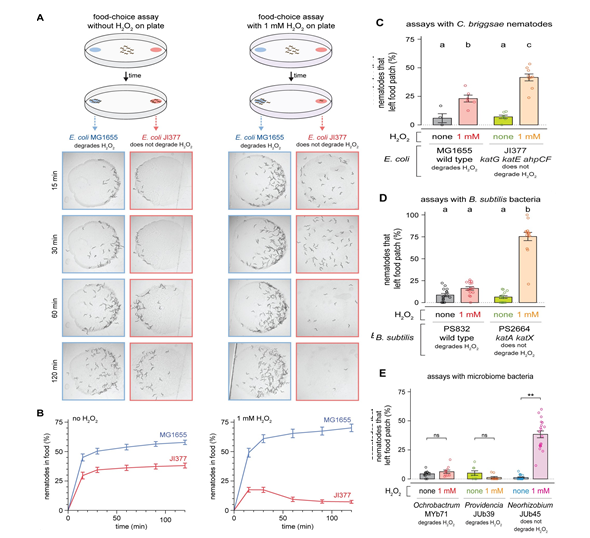 Serotonin also plays a role when it comes to C. elegans’ food-leaving behavior. Serotonin regulates many food-related behaviors and the expression of the serotonin biosynthetic tryptophan hydroxylase gene tph-1 increases with food. The researchers found that tph-1(mg280) null mutants andtph-1(n4622) null deletion allele mutants, which specifically lack serotonin, were more likely than wild-type animals to leave a lawn of E. coli JI377 when 1mM H2O2 was added to the environment(Figure2A,B). So, low serotonin level promotes C. elegans food-leaving in aversive environment, and how about the opposite? A mod-5 (n822) mutants, whose presynaptic serotonin level was kept at constant high, were recruited for the investigation on that front. As expected, the result from the later trial revealed that such mutant, when compared to wild type strain, had a lower leaving rate when feeding on the E. coli JI377 lawn flavored with H2O2(Figure 2C). In conclusion, serotonin functions in a dose-dependent manner to inhibit the nematode’s H2O2-induced food leaving behavior.

The activities of sensory neurons tell us how C. elegans balance between stay or go when foraging on a lawn. There are 60 ciliated and 12 non-ciliated neurons that make up most of C. elegans sensory functions and twelve pairs of those ciliated neurons make up the nematode's major sensory organs, the two amphids, responsible for smell, taste, and temperature sensation. To test the neuronal response, the researchers designed acustom-built microfluidic device todetectthe activity ofamphidsensory neurons inresponse to combinations of E. coli and H2O2. It's worth noting that the attraction to E. coli and the avoidance from H2O2 were actually elicited by the function of different neuron pairs(Figure3). The ASJ neuron pair seemed to be playing a decisive role when it comes to the nematodes’ avoidance from potentially lethalH2O2 presence. While C. elegans’ strong attraction to E. coli in the absence of environmental H2O2 was mirrored by the pattern of neuronal activity induced by E. coli. Exposure to E. coli excited sensory neurons that promote locomotion toward attractive cues(ASEL, ADF, AWA, and BAG) and generally inhibited sensory neurons that promote locomotion away from repulsive cues(ASH and ASK were inhibited, but AWB was excited).The excitation and inhibition of different neuron pairs responding to varying concentrations of environmental signals would eventually help the worm "make up her mind" in terms of staying or leaving.

Some potentially evolution-shaped survival strategies were found during trials, with some nematodes chose to remain on the lawns where lethal doses of H2O2 were used. Most worms behaved according to "common sense", that they left the feeding lawn when they sensed the environment to be unsafe for feeding and reproduction. However, intriguingly, researchers found that not all worms seemed to be following the rules. Despite in some trials the H2O2 concentration reached a lethal level for C. elegans’ survival, some worms remained there, almost determinedly(Figure4). The lack of unanimity in the choice of staying or leaving could be understood as a bet hedging adaptation to changing environments, because leaving a lethal environment with food does not guarantee finding one conducive to growth and reproduction, while staying in an adverse environment may lead to survival and reproduction if conditions improve.Hedging the food-leaving behavior is in essence a gambling, since the other end of the situation could very well be permanent impairment or even death, if the harsh condition persists. Well, I guess the gambling blood runs not just down the human veins. 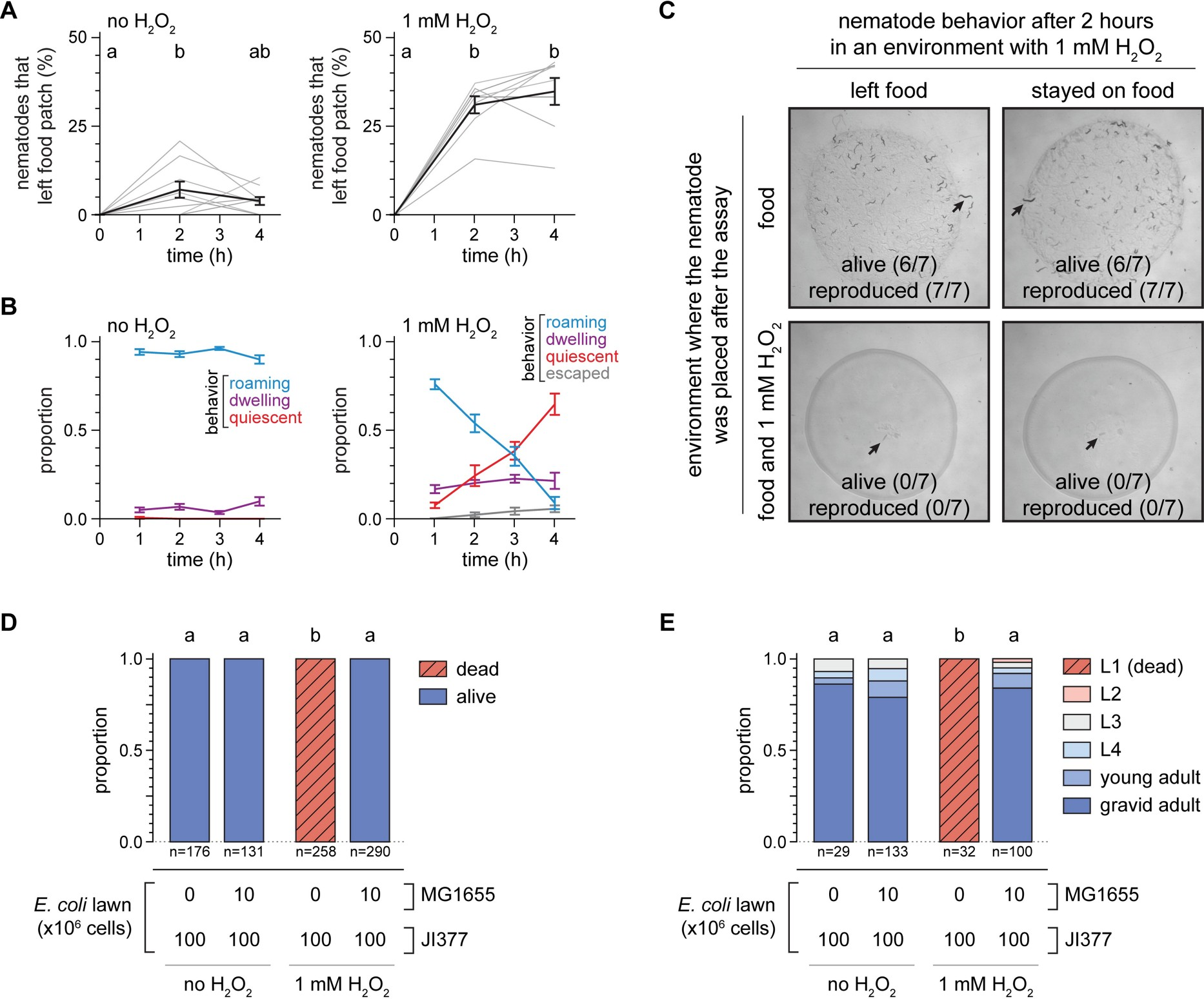 It’s amazing that we can learn so much from such a little worm. The mechanisms behind C. elegans’ selection for feeding ground may well mirror that of many other animals across the spectrum of different categories. The underlying biochemical process is even older, shaped through millions of years of evolution, and hence, is shared by many others. Perhaps that offers an answer to the question of how beneficial it is studying nematodes.