Scientists have invented airplanes based on the principles of bird flight, designed radar through  bats using ultrasound to locate their location during flight, and inspired by electric fish to devise the volt battery, etc. Many inventions and creations solve specific problems in the field of technology by imitating the ability of animals and applying natural laws. Through these inventions, we are gradually turning science fiction into reality. A recent paper published in Science Robotics gives us a taste of what the robot world looks like. In this paper, optogenetics and biological methods are used to create a highly controllable micro soft robot.

Under the iteration of MEMS technology and photoetching technology, the field of micro robot has made great progress in the past decades, and has been gradually tried to be applied in the scene of targeted drug delivery, measuring organelle modulus, assisting sperm movement artificial insemination and so on. However, there are still many technical bottlenecks in the research of controlled micro-robots with sizes of hundreds of microns or even several microns. Learning the movement of natural creatures is one of the most effective strategies for designing micro robot. Natural organisms have complex body structures, efficient energy flow and advanced motion control systems that are far beyond any artificial machine. These biological characteristics provide a great inspiration for the design of various micro robots. " The creature itself is the perfect robot. " Said by Dr. Dong, the author of the paper. He used machine vision, motion control and navigation algorithm to replace the brain of the C. elegans, reconstruct the sensory motion system of C. elegans, control the nematode accurately, and directly develop the micro level organism into a controlled micro robot (Fig.1).

Fig.1 (A) The hardware architecture of the patterned-light illumination system based on an inverted microscope.

(B) The illustration of light-driven muscle group activation on a C. elegans for controlled locomotion.

In the specific experiment, the researchers first used chemical methods to block the information transmission between motor neurons and muscle cells. At this point, the C. elegans is still alive, but the nervous system is temporarily anesthetized and unable to communicate movement instructions to the muscles. Then, the morphology and surrounding environment of nematodes were analyzed in real time by machine vision algorithm. After further modeling and control algorithm synthesis, the muscle cells were irradiated by blue laser with wavelength of 473 nm using optogenetic method, to stimulate the ChR2 channel opening on the cells, and let calcium ions enter the muscle to stimulate contraction, then the experimenters were able to control the movement of nematode muscle. In this artificially modified living robot, researchers designed algorithms to realize all five motion modes observed by C. elegans in natural state. Also, it gives the C. elegans a "global vision" which they don't have in nature: through motion control and navigation algorithm, this living soft microrobot can be maneuvers to avoid obstacles and navigate through the maze in one go (Fig.2). 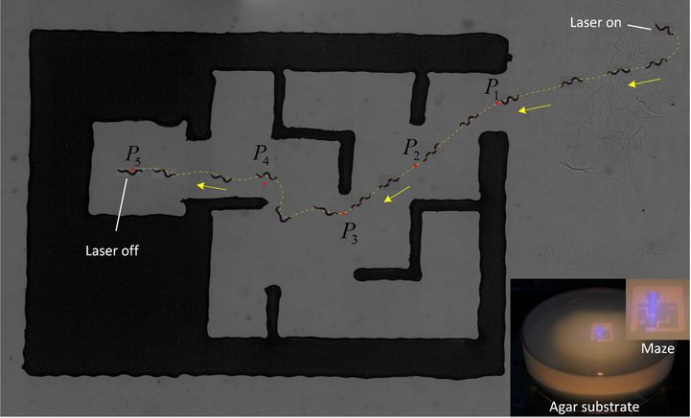 Fig.2 Control of the RoboWorm to automatically navigate through a physical maze.

This paper also involves the phase difference between the active part of muscle and the curvature of the body in the process of snake-like movement of C. elegans. A dynamic model of C. elegans was constructed and verified both in theoretically and experimentally that the phase difference was the cause of driving the serpentine crawling movement of C. elegans (Fig.3). The study of neurology and biodynamics in C. elegans research provides an excellent platform, and provides innovative ideas for the development of robots at micron scale. Combined with the fluorescence imaging of muscle activity, this paper also has demonstration significance for the kinetic study of snake movement at micron scale, and simultaneously has enlightenment significance for the treatment of other biological paralysis diseases. 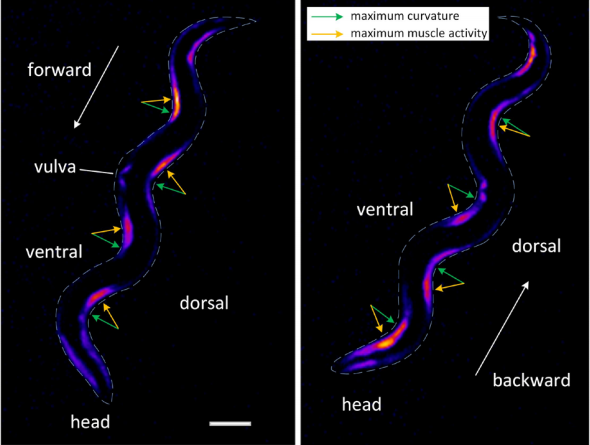 Reference: Toward a living soft microrobot through optogenetic locomotion control of Caenorhabditis elegans.