The bacteria that inhabit our body, known as our microbiota, influence many biological processes in both health and disease, which greatly contributes to our metabolic capacity. The gut microbiota are among the first cells to encounter orally ingested nutrients and xenobiotics. Studies have shown that the microbiome influences the efficacy of drugs, so it is important to systematically identify which bacteria can modulate the efficacy of which drugs, and to dissect the mechanisms involved.

The paper, published in the Nature Communications, suggests that tamoxifen toxicity relies on two distinct mechanisms depending on the dose: at low doses, tamoxifen slows the growth of ER-positive, whereas, at high doses, tamoxifen kills independently of whether the cells express ER. Since this cell death does not depend on ER, it can be considered an off-target effect. The researchers employed C. elegans as the model organism for this specific inquest. Having a main diet of bacteria like E.coli, and being easy to manipulate genetically with the current CRISPR/Cas9 gene editing protocol, these little nematodes come in really handy for such an investigation.

The next part of this study focuses on the relationship between the fatty acid synthesis taking place in the worm body and the toxic response of the nematode. With CRISPR/Cas9 protocol, the researchers were able to obtain worms genetically modified to express different levels of fatty acid synthesis and metabolism. They were able to determine the generic role fatty acid metabolism played in negating tamoxifen toxicity with a dhs-19 deletion mutant strain(Figure 2) and to draw a big picture that there’s a system-level involvement of fatty acid biosynthesis in mitigating tamoxifen toxicity. 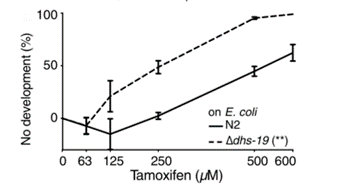 However, the fatty acid profile of C. elegans was not completely consistent with that of feeding these 3 bacteria (Figure 3). The content of MUFA, mmBCFA, and CPFAs are strongly correlated with the diet, but the polyunsaturated fatty acid (PUFA) content is not largely dependent on the intake of their bacterial diet. Knockout of genes involved in fatty acid synthesis increased the toxicity of tamoxifen. These results suggest a complex interaction between dietary fatty acids, fatty acid synthesis, and tamoxifen toxicity. Based on different bacterial diets, FA or vitamin E supplementation can mitigate tamoxifen toxicity differently. 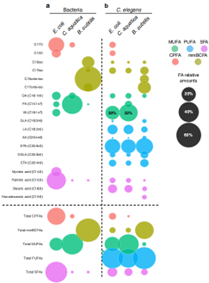 This study provides a perfect example of how we can use C. elegans as a model to test different hypotheses to solve problems we face in clinical trials. It is often very complicated how a designed drug interacts with the human body.  By designing and experimenting with genetically modulated mutant strains, scientists are able to build and test their ideas much faster. Of course, when it comes to the conservation across the phylogenetic tree, what we see on nematodes doesn’t always carry onto mammalian models as it is, but one should agree that all the weight lies on the head start.