Potential of cannabidiol to prevent Alzheimer's disease in Caenorhabditis elegans

The past three years have been the main stage for the covid-19 global pandemic with its coverage and discussions serging and falling. While all the mayhem was going on at the front stage, scientists have been plowing steadily through the hard toil of finding better solutions for people ailed by chronic neurodegenerative diseases like Alzheimer’s disease and Parkinson’s disease. We know that the covid virus would impose symptoms similar to those endured by flu patients with rapid and burning sensations of pain upon its victims. However, what Alzheimer’s disease and other neurodegenerative diseases are capable of is something closer to a trickling stream of pain and hopelessness. The direct and consecutive human suffering has established for us a clear goal that humans will act as one to find a way out for those who are suffering, as well as for those who might cross paths with it in the near future.

Recently, a group of Chinese scholars led by Yue Zhang has published a research paper in the European Journal of Pharmacology introducing yet another substance that may help with the battle against Alzheimer’s disease(AD). The study used C. elegans as a model animal to elucidate the mechanism by which cannabidiol(CBD) ameliorates AD. CBD is a nonpsychoactive phytocannabinoid with anti-inflammatory, antioxidant, and, above all, neuroprotective potentials.

The researchers used CL4176, a commonly used in vivo model for AD, to evaluate the effect of CBD on the progression of AD. After conducting several trials of experiments, the team was able to draw a conclusion that CBD could alleviate the progression of Alzheimer’s disease in worms in a dose-dependent manner (Figure 1A). It was found that CBD was capable of delaying paralysis in the CL41746 strain and in the meantime, improving several characteristics of aging such as the degree of body bending (Figure 1B) and the pharyngeal pumping rate (Figure 1.C). However, CBD only mitigated the progression of Aβ-induced AD but not tau protein-induced AD and α-syn-induced PD. Despite the specificity, it’s still promising news, since the aggregation of amyloid-beta (Aβ) has been regarded as one of the major pathological causes of Alzheimer’s.

Figure 1. The effect of CBD on Aβ-induced AD-like symptoms in C. elegans

CBD has also shown promising properties in scavenging reactive oxygen species(ROS). A sharp increase in ROS levels can cause serious damage to cellular structures, a process known as oxidative stress, which is thought to be a major factor in aging and disease. As a plant-derived polyphenol, CBD was found to be equipped with several phenolic hydroxyl groups that can directly scavenge ROS. Two CBD derivatives with methylated phenolic hydroxyl groups, CBD-M1 and CBD-M2, were also used in this paper (Figure 2A). Representative fluorescence images of Aβ deposits in CL4176 treated with CBD, CBD-M1 or CBD-M2 are shown in Figure 2B (Red arrows indicated the Aβ deposits). And we can found that the hydroxyl groups are critical for CBD alleviation of the progression of AD. In addition, the antioxidant mechanism of CBD does not involve SKN-1 and DAF-16, which are the main transcription factors involved in preventing oxidative stress. 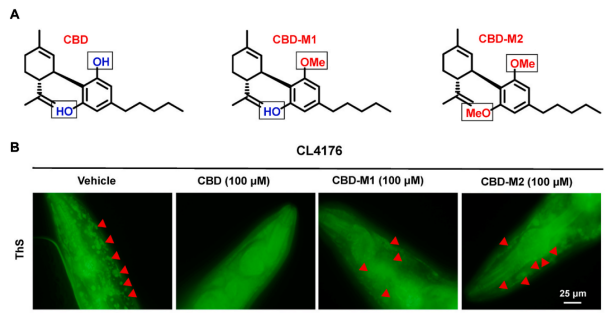 Figure 2. (A)The chemical structures of CBD and its derivatives CBD-M1 and CBD-M2. (B) Representative fluorescent images of Aβ deposits.

To wrap things up, it was discovered in this paper that Cannabidiol (CBD) has great potential in alleviating Alzheimer’s disease, specifically the ones induced by the aggregation of amyloid-beta, which is commonly seen. The antioxidative property promoted by the attached phenolic hydroxyl groups plays an important role in the entire mechanism. It’s comforting to see that many other papers like this one are being published every year suggesting new substances with healing potential. Before moving to mammalian trials, and eventually human clinical trials, researchers would often choose nematodes as the platform for the first round of research. Within such a small body carries such a great room for the hopes of millions.