The modern lifestyle has presented us with an unprecedented challenge in health management. Unlike our ancestors whose main problems of survival oscillated between diseases, famine, and war, the people of late now face another set of problems by no means less lethal. Sugar, which was hard to isolate and procure in the old days, is now readily available to people in various forms and shapes. Refined food has infiltrated every part of our daily life. Following such an environment and lifestyle,chronic diseases like hyperglycemia and diabetes mellitus can easily emerge, and they will bring interminable suffering to patients. Therefore, it’s natural for scientists to look for solutions tackling such problems.

The article “Sulforaphane and vitamin E protect from glucotoxic neurodegeneration and lifespan reduction In C. elegans” shared this time is from German scholar Andrea Schlotterer. The effects of sulforaphane(SFN) and vitamin E on HG-induced ROS formation and neruonal damage were studied in this paper. Sulforaphane and alpha-tocopherol(Vitamin E) are two common antioxidants, one indirect and other direct, found in food widely available to us, such as cruciferous vegetables. The researchers of this paper have recruited C. elegans as the model organisms, thanks to its neuronal system is easy to assess and lifespan studies can be performed in a short time compared to higher organisms.

Sulforaphane and vitamin E offer protection from lifespan reduction by glucotoxic stress. The researchers monitored the average lifespan of C. elegans first under the standard environment, and then, in an environment exposed to an elevated level of glucose. It was first established that a high-glucose environment indeed can reduce the average lifespan of nematodes tested by a significant amount,  from 24 days to around 20 days(Table 1). Then, by supplying the worms under HG-induced stress with sulforaphane and vitamin E, the researchers observed a rescue effect by the two substances with the lifespan parameter restored to that of the standard(Table 1) .

Both SFN and vitamin E have antioxidant properties. ROS(reactive oxygen species) is usually taken as the indicator for the level of oxidation within an environment. By conducting an analysis on the formation of ROS within C. elegans from different environments, the researchers were able to determine the oxidative stress the worms were going through in the corresponding environment. HG environment could significantly increase the ROS production within the nematodes, with a 53% increase compared to the standard. While, both SFN and VitE largely prevented the increase in oxidative stress levels in nematodes under HG conditions(Figure 1).

The shortening of lifespan under hyperglycemic conditions is partly due to the accumulation of methylglyoxal-derived advanced glycation endproducts(MG-derived AGEs), and the researchers discovered in this paper the potential of rescue by SFN and VitE. It was established in many previous studies that MG-derived AGEs could severely impair mitochondrial cell integrity, causing mayhem within the body. The researchers of this paper also observed a significant increase in AGEs in worms cultivated in the HG-environment. Following that, amazingly, was an observed restoring effect by these two substances(Figure 2). It’s worth noting that under standard environment neither sulforaphane nor vitamin E offered any extra benefit, so no lifted ceilings. Both them offered rescue when the condition was deteriorating, a remedy so to speak. 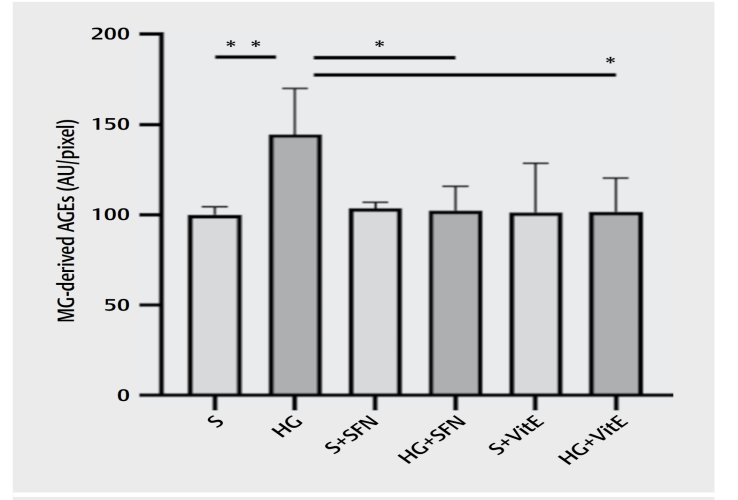 The next, and probably the most important focus of this study was to look at the roles played by the two antioxidants when it comes to preserving neuronal integrity under glucotoxic stress. Glucotoxic stress could lead to misfoldings of various functioning proteins and the chain reaction would eventually manifest itself in the form of neurodegenerative diseases such as Alzheimer’s. The researchers usedthe 4-stage neuronal damage score(NDS) to distinguish neuron damage in C. elegans under different conditions(Table 2). In the trials performed, it was only for the worms in the HG-environment that the stage 3 damage was observed, meaning that, by supplying the worms with sulforaphane and vitamin E, individually, it was possible to protect the nematodes from the damaged induced by the environment(Figure 3).

The medical establishment of today has provided ample evidence to support the theory of the damaging effect of a high-glucose environment. It was pathologically and clinically evident on diabetic patients and patients suffering from neurodegenerative diseases. Though, from the results gathered from this paper, it seemed that sulforaphane and vitamin E offered no further boost to worms enjoying a “healthy lifestyle”, it did come out promising as a remedy and prevention of further complications for those in a HG environment. Hopefully, we’ll see more solutions present themselves, just like this one, as we push the frontline forward.